Looking at Underworld Cleaning Service's post on PC Centaurs made me think about centaur encounters. 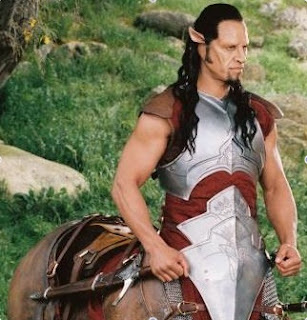 Well, let's take a look here, shall we? Centaurs are described as reclusive beings who avoid combat when possible, but –if they have to fight– are unlikely to surrender.

Reclusive: Centaurs appear not at all on the random encounter tables for LL or Moldvay Basic (see the "0" under No. Appearing), and they only appear one time in twelve on the "Unusual" encounter subtable in Cook Expert. Yeah, I'd say that's pretty reclusive.

Assuming a party does encounter these creatures, it's probably on or near the herd's home ground. So 2d10 gives us an average of 11 of these critters. Reading the text, I am assuming that's 11 male "protectors", not the noncombatant females or young. If the herd is directly threatened, I expect that's one of those "willing to fight and not surrender" situations.

Centaurs are actually pretty scary. That 60' move is going to eat up the ground closing to melee (or retreating to missile distance). The 4HD is going to hit pretty often (THACO 16) especially when you consider he's going to usually be making three attack rolls each round; it also means he's tough enough you're unlikely to drop him in a single attack (or even two). Even though they are susceptible to Sleep spells, at most you are affecting four of them (2d8 HD). His AC is equivalent to chainmail (sans shield) (nothing says he can't improve that by wearing barding + armor). A centaur charging with a lance/spear for double damage then smacking you with two hooves? Ow.

I could also see the centaur carrying bows or javelins, harrying a party at range and keeping clear by  simply outrunning them. Or some combination thereof. Several javelins plus a long spear. Attack at range for a round or two, then charge into melee with couched spear, followed by hooves to their opponents' skulls.

Did I mention they are usually around eleven of them?