I sometimes think this monster was added just to have a less scary version of the Purple Worm. It's smaller, less fewer hit dice, and no poison stinger. All that said, my initial reaction at 1d3 school bus-sized worms bursting out of the ground isn't likely to be, "Phew! Thank goodness they aren't the BIG kind!" 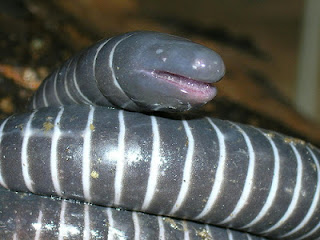 In Cook Expert, Caecilias have a reasonable representation on the dungeon wandering monster charts (levels 4-7), and the are a possible jungle encounter in LL. Still, not SUPER common.

The main thing about this creature is its swallow whole ability. Granted, it only happens 10% of the time, but there's no save and GULP! They are tough enough to last several rounds and –if you are dealing with more than one– the odds of that 19 or 20 swallow happening keeps climbing. Once inside its gullet, it's 1d8 damage per round (not including the 1d8 you took from the initial bite) until the worm is dead. If you're on the inside, you can only use a dagger to attack, and you're at -4. If your GM is an SOB (like me), you'll need a round just to take the dagger out (if not already in hand). Also, while it's not really discussed in the text, I assume these things burrow like purple worms. This can be a huge tactical consideration, since they basically can close instantly. At the least they will severely limit your chances to harry them with ranged attacks before they can start chomping.
Posted by Bighara at 3:39 PM