So in true random form, I rolled on the Labyrinth Lord treasure tables for spell scrolls to arrive at today's spell. There's only a 25% chance of a clerical spell popping up, but I got the 4 on the d4. A % roll of 76 meant a 4th level spell. Finally, an 8 on a d8 while referring to the spell lists brought us to Sticks to Snakes.

(Moses was at least 7th level)


Now, that's not bad, changing kindling into a cobra. But let's look at the spell as listed in Labyrinth Lord and Cook Expert.

First off, you aren't changing one stick with the spell, you're changing 2d8 sticks. That's a lot of reptiles suddenly popping up.

Also, you can change sticks over a hundred feet away! (120') In the wilderness, that changes to over a hundred YARDS! Frankly, I find that pretty cool. Imagine flinging this spell into the firewood pile in the middle of some enemy camp. That's a pretty nice diversion right there.

There's only a 50% chance that the snakes are venomous, but unless they've got a ranger or druid handy, are the targets really going to test that out? I suppose a rat bastard GM might roll for each individual snake, but that might be a headache to track.

Did I mention the cleric can give the snakes orders?? Snakes are deaf! I guess that means he doesn't have to be within earshot, then! Not to mention that the spell lasts over half an hour, so unless they are killed, these serpents are hanging around for a fair bit.

The snakes themselves are relatively wimpy (1HD, bite for 1d4 damage, AC 6) much like the spitting cobra. But the spell's effectiveness is in its distraction and surprise value, more than its combat power.

When you look at the other "go-to" 4th level clerical spells, you usually see things like Cure Serious Wounds and Neutralize Poison. These are great spells, to be sure, but I think a cleric PC (or NPC) might get serious mileage out of the old "S2S" under a lot of circumstances. 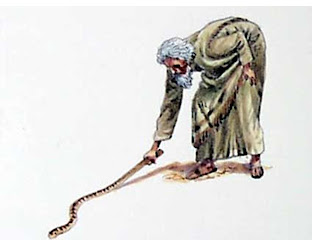